At the June 7 Palm Coast City Council Meeting, City Manager Denise Bevan appointed Battalion Chief Berryhill during the recognition of 2021-22 LITE (Leadership in Training Experience) agenda item; Chief Berryhill is a 2018 LITE Team graduate. “It is truly an honor to be able to announce this very important appointment to Fire Chief of the Palm Coast Fire Department,” Ms. Bevan said. “Kyle is an invaluable member of our organization and is a mentor and friend to many, especially at the Fire Department. I hope you will join me in congratulating soon-to-be Fire Chief Berryhill on this well-earned promotion. And a very special thank you to Chief Jerry Forte on your dedication to this organization and this community, and for helping to raise up our future leaders.”

The Palm Coast Fire Department values their mentoring and succession planning programs, believing in training future generations and preparing the next person to move up. Over the last year, Battalion Chief Berryhill has been mentoring under Chief Forte and Chief Clark in order to prepare him for this opportunity. As part of the department’s succession plan, the department is prepared to make the appointments in the line of succession created by Berryhill’s appointment to Fire Chief.

“Over the last sixteen years, I have had the distinct privilege of watching Kyle Berryhill grow into one of the finest Chief Officers,” Fire Chief Jerry Forte said, “Kyle’s appointment is a direct reflection of our succession and mentoring programs by investing in our most precious asset, our people.” 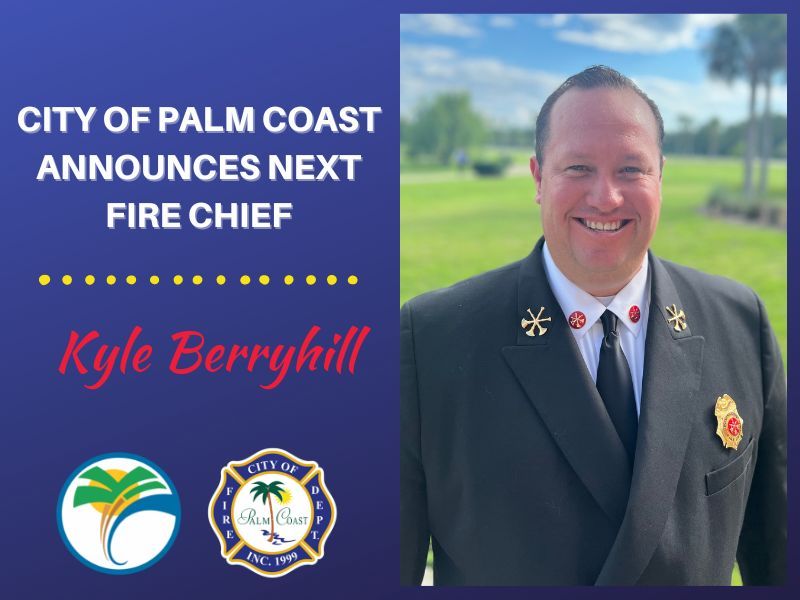