“Volunteers are a rare breed who remain humble in their pursuit to change the world, one hour at a time,” Volunteer Battalion Chief Tim Wilsey said. “In today’s society, it is a rare occasion to be able to honor someone for 30 years of commitment to anything.”

Michelle LaMonica joined the Palm Coast Fire Department in 1992 as a first responder.  She obtained her Firefighter and EMT Certifications in 1993, followed by her nursing certification in 1998. She has previously served as Treasurer of the Palm Coast Volunteer Fire Rescue Corporation. Currently, Michelle serves as the secretary for the corporation and maintains the Health and Wellness Committee.

Mr. Jim Lee served in the United States Air Force before joining the FDNY in 1961. He served 28 years, rising to the rank of Captain of Engine 274 before he retired to Palm Coast in 1990. He immediately became involved with the Palm Coast Fire Department as a Volunteer Firefighter, and was a veteran of the 1998 wildfires as well. Over the years, Mr. Lee served as firefighter, fire police, Fire Police Lieutenant and currently as an Associate. He is most affectionately known as the unofficial photographer with a camera that never produces a photo.

Howard Peiffer started his career with the Mohegan Fire Department in Northern Westchester County, New York following in his father’s footsteps. After serving in the United States Army as a Specialist 4th Class, he returned home and started his professional career at the Greenville Fire District in Scarsdale, New York. After two years in Scarsdale, Howard transferred to the Lake Mohegan Fire Department where he served the residents for 25 years. He and Marianne, his wife of 44 years, retired to Palm Coast in 1992 where he became involved with the Palm Coast Fire Department. Howard served as Chief of the Department from 1993 – 1995, is a veteran of the 1998 wildfires, and has served as President of the Palm Coast Volunteer Fire Rescue Corporation. Howard currently serves as Vice President of the PCVFR in addition to being the Associate Coordinator.

Palm Coast Mayor David Alfin added, “We’re so blessed to have selfless public service volunteers who have given a lifetime career of volunteer service to our city. Thank you to Volunteer Fire Associates Michelle LaMonica, Jim Lee and Howard Peiffer for your service.”

“The future of our Palm Coast Fire Volunteers will be to enhance the training of its members and continue the support of providing that protection to our neighbors and to serve as a vital part of any community,” said Fire Chief Jerry Forte. “We are fortunate to have members of our department who have been a part of the foundation, building blocks these past 30 years, and have helped see us through much of our transition and modernization.” 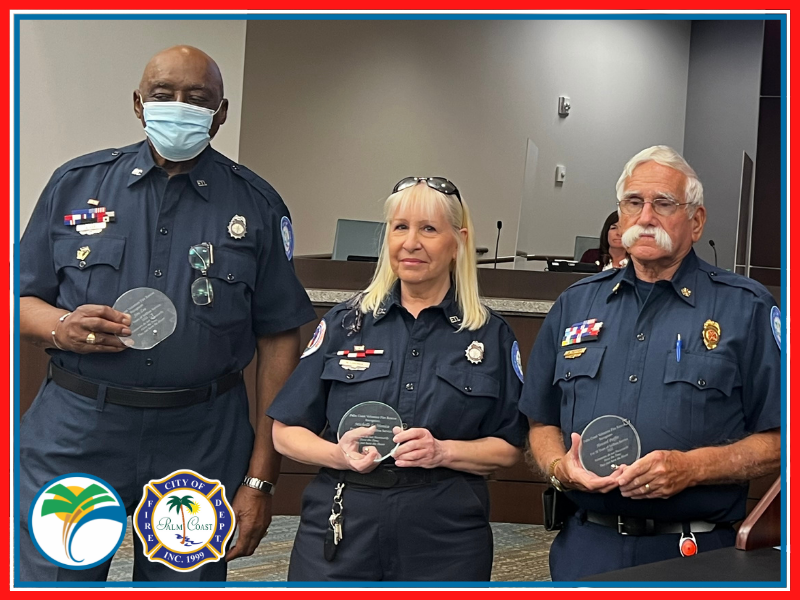