The Palm Coast Fire Department (PCFD) recently recognized the efforts of firefighters for their actions in helping to save the life of a juvenile who had climbed onto the overpass of Palm Coast Parkway & I-95 bridge on Father’s Day. The teen was having a mental health crisis and was a threat to herself.

Engine 21 and Ladder 25 were dispatched to assist the Flagler County Sheriff’s Office (FCSO) on the morning of June 20, 2021, for a juvenile holding onto the outside railing of the overpass. Upon arrival, crews immediately went into action in setting up Ladder 25 and assisting the FCSO in bringing the distressed teen to safety. PCFD Interim Fire Chief Kyle Berryhill praised the efforts of the FCSO, the Flagler Beach Police Department, Flagler County Fire Rescue, and the Florida Highway Patrol by stating, “The interagency cooperation is what helps us protect our citizens the best, and this was an example of that”.

PCFD Captain Thomas Ascone nominated the firefighters for the awards, stating, “I have the privilege to work with some amazing and talented individuals. I’m so proud of the work they do day in and day out.” Ascone nominated Driver Engineer Paramedic Kalin Graham and Driver Engineer Mark Davidson for the Gold Life Saving Medal. This medal is presented to a firefighter who, in the face of personal hazard, saves the life of another person with disregard to personal safety, without their actions creating an additional hazard or compromising the mission.

“The job that the Fire-Rescue and Sheriff did was simply superb”, stated Mayor Eddie Branquinho at the June 22, 2021, Palm Coast City Council Meeting. He also stated, “That truck saved the life of a 17-year-old”.  Ladder 25 was recently dedicated this past Memorial Day to the memory of Marine Sergeant Zachary J. Walters who was killed during a tour of duty in Afghanistan; it is currently in service at Fire Station 25. 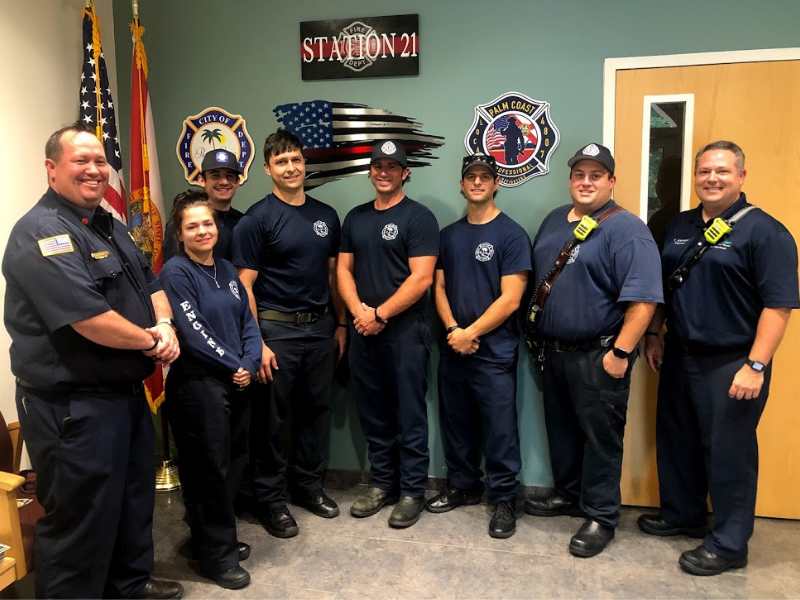