This page was printed from : https://www.palmcoastgov.com/newsroom/2021/4/30/10025/palm-coast-residents-can-provide-input-through-brief-code-survey
The Newsroom

Palm Coast – Palm Coast residents are invited to take a brief, one-question survey with respect to a specific City code - Chapter (section) 44-34 (sub-section c). This code outlines rules for parking and storage of vehicles by prohibiting commercial vehicles larger than one ton - with affixed advertising markings in excess of three square feet per side - to be parked in a residential zone, along with other terms defined in that section.

At the April 13 City Council workshop, a City Council consensus directed the City Manager to develop a survey to garner resident feedback on possibly changing the code.

The survey will be available from May 1 until June 1 at palmcoastgov.com/citizen-engagement-survey.

When what is now Palm Coast was being developed by International Telephone and Telegraph (ITT) Corporation, the city’s original developer, several rules were established in the 1983 ‘Palm Coast Restrictive Covenants and Easements.’ The corporation attracted prospective buyers by establishing deed restrictions to promote residential harmony, maintain property values and showcase aesthetically pleasing neighborhoods. ITT’s vision was that Palm Coast be a uniquely planned, built and maintained model environmental community. To date, Palm Coast’s Code of Ordinances have continued to foster that original founding vision.

Over the years, the City has received numerous comments, some in favor of changing the Code of Ordinances regarding this topic and some to leave it in place.

Residents can answer the following question regarding the referenced code. Their answers will help guide the City Council in future possible decisions on this ordinance.

Would you be in favor of amending the Code of Ordinance Sec. 44-34 (C) to allow ONE commercial vehicle (passenger car, panel van, pickup truck or similar) with advertising markings to park in a residential driveway?

To vote please to go to Palm Coast Connect or go directly to this link:

A virtual town hall video will be released on May 7 regarding this specific code. You can watch it on the city’s YouTube (@palmcoastgovtv) and Facebook (@palmcoastgov) channels. Residents can learn about the history of the code, what is allowed in the current code, along with picture examples to educate the community about this topic. 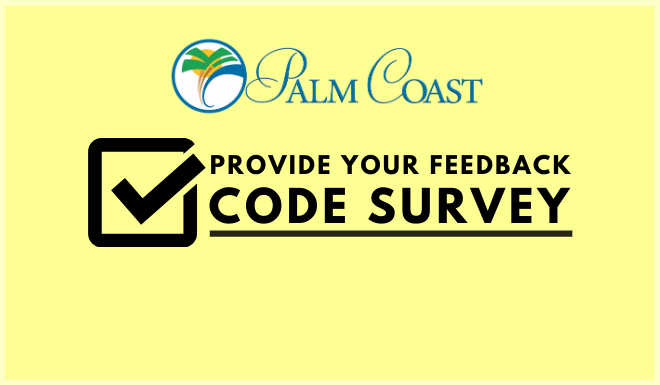