Experience It! New Connect Learn More
This page was printed from : https://www.palmcoastgov.com/newsroom/2021/11/3/10131/veterans-day-ceremony-to-feature-local-sons-of-the-american-revolution-past-president-randall-scott-morris?externalAnn=veterans-day-ceremony-to-feature-local-sons-of-the-american-revolution-past-president-randall-scott-morris
The Newsroom

Flagler County residents are invited to gather with the Board of County Commissioners to honor the men and women who bravely serve in the country’s military at the Veteran’s Day Ceremony at 10 a.m. Thursday, November 11.

“On behalf of the Flagler County Veterans Advisory Council, we would like to announce our special guest speaker will be Mr. Randall Scott Morris, a U.S. Army veteran who served in the Vietnam War and who is also past President of the Flagler Chapter of the Sons of the American Revolution,” said Veterans Services Officer David Lydon.

Morris was raised in Flagler County from the age of 2 when his family moved here from Kentucky. He graduated from the former Bunnell High School in 1963, and returned to Kentucky to attend Western Kentucky University where he earned his Bachelor’s and Master’s degrees.

He enlisted in the U.S. Army in November 1967, and was honorably discharged in August 1970. During his service, he was promoted to Staff Sergeant within 26 months – a remarkable feat. Morris served in Vietnam in 1969 and 1970, during which time he was awarded the Bronze Star.

Morris is a proud descendent of Lieutenant Andrew Putnam of the 4th Massachusetts Division of the Continental Line and a patriot of the American Revolution.

For this reason, Morris is a member of the Flagler Chapter of the Sons of the American Revolution, a non-profit, non-partisan organization dedicated to promoting patriotism and preserving American history by educating future generations. He is a past president, 1st, and 2nd vice president, and currently serves as the chapter’s registrar and genealogist.

Additionally, Morris is a member of the American Legion Post 115.

Besides featuring keynote speaker Morris – donned in a replica uniform of the one worn by his 4th great-grandfather, Lieutenant Andrew Putnam – the “Flagler County Colonel Gary E. DeKay Veteran of the Year” award recipient will be announced.

This event will be held at the flagpole of the Government Services Building, 1769 E. Moody Boulevard, Bunnell.

Later in the day, the City of Palm is hosting a free barbecue lunch from 11:30 a.m. to 1 p.m. for veterans and their families at Central Park in Town Center, 975 Central Avenue. Reservations are requested and can be made by calling 386-986-2323 or in person at the Palm Coast Community Center.

The City of Flagler Beach is hosting its traditional ceremony at 1 p.m. in Veterans Park, located on the southwest corner of State Road 100 and State Road A1A.

“We will have a special guest speaker and music like we do every year,” said Flagler Beach Commissioner Jane Mealy. “We look forward to honoring our veterans.” 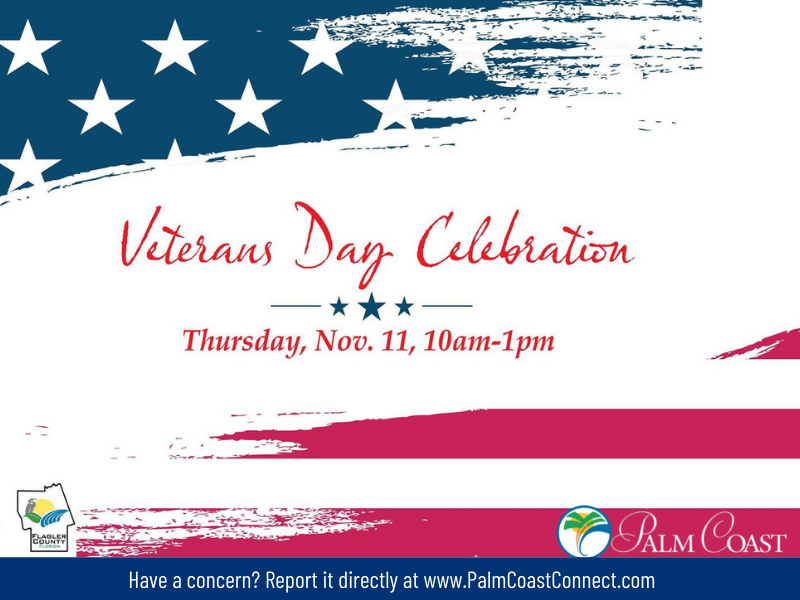