Experience It! New Connect Learn More
This page was printed from : https://www.palmcoastgov.com/newsroom/2021/11/17/10142/fire-chief-jerry-forte-recognized-with-tony-gasparino-lest-we-forget-award?externalAnn=fire-chief-jerry-forte-recognized-with-tony-gasparino-lest-we-forget-award
The Newsroom

The Knights of Columbus Corpus Christi Assembly 2810 and Santa Maria Del Mar Catholic Church recognized Palm Coast Fire Chief Jerry Forte with the Tony Gasparino “Lest We Forget Award.”  Attending with Forte was his wife, Lisa, and his mother, Theresa.

Forte has served as Fire Chief of the Palm Coast Fire Department since 2018; for the past several months, he has been serving as the Interim Assistant City Manager. Forte started as a Palm Coast volunteer firefighter in 1990, becoming a career member as a firefighter/EMT in September 1992. He rose through the ranks and served as Deputy Fire Chief from 2009 until his appointment to Fire Chief in 2018.

“Chief Forte is an asset to this organization and to this community as a whole,” Palm Coast Mayor David Alfin said. “It would be difficult for me to think of someone who so openly and graciously cares for the people of Palm Coast and Flagler County more than Jerry. He is more than deserving of this award and we are appreciative to the Knights of Columbus for recognizing him. Thank you Chief Forte for your exceptional service.”

Forte earned the Chief Fire Officer designation from the Commission on Professional Credentialing in 2017. An honors graduate of Daytona State College’s fire science program, Forte also earned a bachelor’s degree in public administration and a master’s degree in public policy. He holds numerous state certifications and is a member of the Florida Fire Chiefs Association. He was the state’s 2002 Training Officer of the Year.

Jerry and his wife Lisa have four children between them, all in public service careers. They also have six young grandchildren. 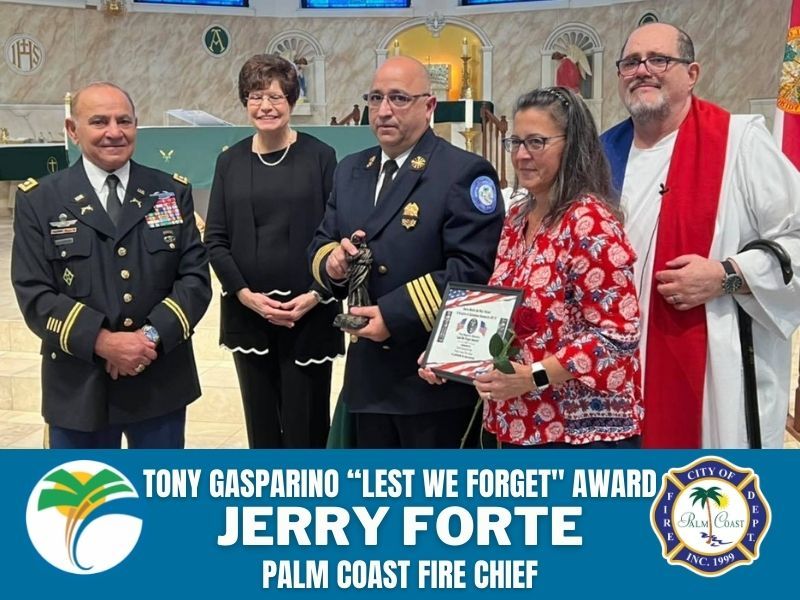