Royal Palms Parkway Reopens on October 1 Ahead of Schedule

An emergency structural repair was required and the City’s Stormwater and Engineering department began seeking contractors to complete the hazardous work as quickly as possible. Unfortunately, the contractors would not have been able to begin work immediately, which would have caused an extended delay in the road closure.

The City’s Stormwater Pipe Crew has the talent and experience to complete this type of work and offered to come forward and complete the job in a timelier manner. The crew estimated that it would take two weeks to complete the work. They began on Monday, September 27th and the road was re-paved and re-opened on Friday, October 1st.

“The guys out here and their devotion has been very impressive,” Stormwater Pipe Supervisor Kevin Nelson said. “The whole teamwork dynamic out here has been incredible. We appreciate you guys being patient with us.”

In order to complete the job as efficiently as possible, the crew worked 12 hours per day. The crew rented a Caterpillar 336 Excavator and 16,000 pound trench boxes for the project and had two hundred tons of base and one hundred tons of rock delivered to the site.

“We’re very proud of the team for coming together and taking on a project that could have taken up to a month to complete and accomplishing it in just five days,” Interim City Manager Denise Bevan said. “I think this is a great testament to the quality of individuals who serve the citizens of Palm Coast and I couldn’t be more encouraged by their hard work and tenacity.”

The road was paved early Friday morning and will be striped over the weekend. The road is now re-opened to traffic. The City of Palm Coast appreciates the community’s patience with this unexpected project. 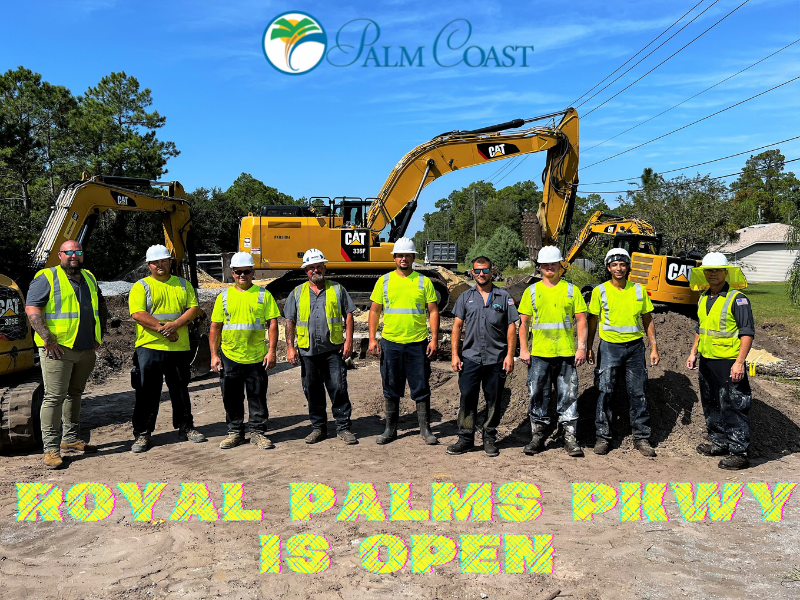