Palm Coast - Despite a global pandemic, it's been a productive year for capital projects in the City of Palm Coast. This success is due to the City's Stormwater and Engineering Department that manages all capital projects from start to finish.

In 2020, the Stormwater Department team updated their 40-year-old facility buildings for their temporary home until the new permanent Public Works facility is constructed at which time both departments will work from the same facility. Improvements included converting the old county mosquito control facility into useable buildings for offices, conference rooms, locker changing area, training area and storage. All non-specialized trade work was performed in house by Stormwater staff. In 2021, the facility will replace some overhead doors, lighting, add a secure storage area and a generator.

Hardware upgrades were made on Palm Coast's FiberNET to allow for increased capacity on lit fiber connections, and to replace older appliances. In 2021, FiberNET is looking to overhaul its second colocation facility and prepare a location for a possible third colocation structure. The City will also perform a large scale network refresh of its core network infrastructure by replacing aging hardware. Physical network changes are also planned to further secure the Utility infrastructure.

Several roads around Palm Coast received changes. Design took place in 2020 on Citation Boulevard and construction is planned for 2021. Drivers will continue to see construction on Old Kings Rd between Utility Drive and Celico Way. Roadways will be widened, dedicated turn lanes and sidewalks added.  Landscaping will be added northbound as the project continues. Further northbound phases of this project will continue as FDOT grant funding becomes available.. The team also studied how to reduce traffic and other noise along Florida Park Drive. Next year, staff plans to study traffic calming on Rolling Sands Drive and Blare Castle Drive.

Streetlights were installed this year along Belle Terre Parkway in several areas along that stretch of roadway and that will continue into 2021. Design work was completed on Ravenwood Drive, from Whiteview Parkway to Rymfire Drive.

A new traffic signal was added on Belle Terre at the intersection of Market Ave and Eastwood Drive. Traffic signals were re-timed to increase efficiency of traffic flow at each intersection. Next year, plans are in the works for design and construction of signal optimization by implementing a new traffic signal coordination plan at various corridors in Palm Coast. Certain intersections will be redesigned with capacity improvements. A new coordination plan will increase the flow of traffic through the Palm Coast Parkway and Belle Terre Parkway corridors.

More labor was done under the asphalt and dirt, too, as stormwater crews completed many swale regrading and freshwater canal cleaning projects. This team played a major role in replacing, adding and upsizing pipes in neighborhoods where flooding was of major concern. Stormwater crews continue to inspect pipes on a regular basis to ensure their integrity and a diving company was even contracted to assist with inspecting submerged pipe crossings that are difficult to assess in house.

In the New Year, efforts regarding stormwater rehabilitation, pipe and weir replacement and pipe inspections will continue. The E section project that has been under design will close for bidding and construction will soon begin. Results from the K section drainage improvement design and study will allow the City to move forward with much-needed upsizing and replacement projects. The weir replacement project, known as K-6 in the Seminole Woods area, will come to an end and the Blare and Colbert rehabilitation design will also have been completed by the end of the year.

Two major projects were completed this year at the Indian Trail Sports Complex. The Little League concession building received a sizeable upgrade which included replacing everything inside the restrooms as well as improvements to the concession area and other restroom buildings. The second project at ITSC included the design and construction of two additional youth ball fields. The design was finished in-house by city engineers and construction work was performed by our Public Works crews. Upgrades contained new stormwater and irrigation systems under the fields, as well as new fencing, clay, sod, player's benches, dugouts and bleachers. In future years the remaining two fields are expected to be completed to match the finished fields, along with an expanded parking lot.

Phase Two of Holland Park ran full steam ahead. Many of the park's new play features were completed and opened to the public. The splash pad is under construction and expected to finish in February. Three new play zones were completed; The 'Explore the Ruins' zone has a coquina façade with a rock climbing wall, slides, and zip line. The 'Building Our Community' zone features a large artificial turf covered mound with two lighted tunnels where children can run through and a climbing rope inside the stormwater structure to climb up and out. There's also an accessible rocker called the Sway Fun, interactive diggers and fossils in a new sand pit, and a large roped cube to climb in. 'The Oak Hammock' zone has a two-car train, a xylophone, treehouse, bird's nest basket swing, an actual hammock and interactive music posts. In the playground, the city also added a trellis with four bench swings, five new covered pavilions, and a large shade sail structure to keep children cooler in the summer months. This is sure to be a family favorite destination and regional attraction. Lighting was added at the various activity areas. A brand new bocce court with shade covering is now being provided over the new courts that were replaced, shade pavilions for the small dog park, shuffleboard court and horseshoe courts, as requested by citizens. Pavilion 3 restrooms were completely renovated and a building was added for maintenance staff.

Two wooden walkways were improved this year for residents. Repairs were made at Graham Swamp's boardwalk allowing residents to safely walk, bicycle and enjoy nature. Other improvements included work on Waterfront Park's fishing pier. There are plans next year to offer more water access at Waterfront Park: a non-motorized boat access through a floating pier structure, shoreline stabilization and dredging activities is proposed. The improvements are associated with a larger conceptual plan to expand parking and traffic circulation within the site.

The clubhouse at the Palm Harbor Golf Club also received improvements in 2020. The restrooms were gutted and replaced with entirely new fixtures. All of the kitchen's structural flooring was replaced and new LED lighting was added throughout the facility inside and outside including the parking lots. In January of 2021, the crew will be finishing a new icehouse to store machines for the players use.

The Public Works existing facility was renovated this year by its own in-house team with the exception of specialized trade work. The restrooms and training area were expanded to accommodate the increased staff. Next year, the City will begin design of their permanent facility which will include a vehicle maintenance building, vehicle wash and fueling station, offices, storage structures and parking structures.

While this is not an exhaustive list of all capital projects, it highlights some of the major work completed by the City of Palm Coast. 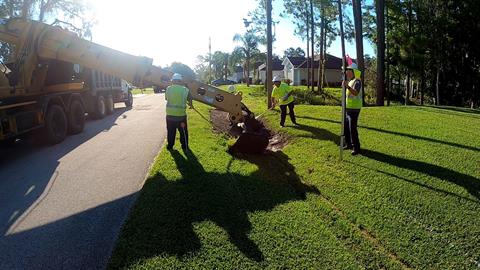