Palm Coast - When City employees were mandated to stay home to stay safe, the Information Technology Department had just days to implement secure and reliable work-from-home solutions. And they did so in 2020 in a smooth and swift manner.

This team set up tools and services for City employees to productively operate from home ensuring residents hardly noticed a difference. They quickly deployed software that would enable staff to securely connect to the City's network from their house or vehicle, while the City's network was configured to host a large amount of remote connections unlike ever before.

IT's efforts paved the way for citizen's generosity during the Feed Palm Coast Initiative last spring when an online donation form quickly enabled an astounding $100,000 in 10 days.

Additionally, they implemented zoom capabilities during the pandemic for public meetings, and later in the summer, assembled the first Emergency Operations Center to be housed at City Hall. It connected phone service, power supplies and TV screens to use in an emergency such as a hurricane or wildfire.

But it was all necessary for the safety and health of everyone.

Residents and businesses now have new mapping tools to check out development in the area, capital projects and what swales are being worked on in the City of Palm Coast thanks to the City's Geographic Information System Division.

As part of an initiative to increase security at city facilities, the city is working towards installing security cameras at various locations. Holland Park was selected as the first location during its renovations. The city's security system was upgraded and expanded to accommodate for the 22 new cameras at the park, as well as for future growth.

Hardware upgrades were made on Palm Coast's FiberNET to allow for increased capacity on lit fiber connections, and to replace older appliances. In 2021, the team plans to enhance the colocation facilities to a more business-friendly atmosphere and modernize the core network infrastructure to capitalize on newer technologies to enable increased data capacity, network flexibility, redundancy and speed. FiberNET is expanding and optimizing its core infrastructure in order to reclaim fiber capacity and create additional services for city government and local businesses as well as offering an open data network for outside companies to grow their own services through colocations and use of our fiber network.

A network-wide refresh of the City's technology infrastructure is planned in order to mitigate risk of failure and to take advantage of advancement in hardware technologies. This update will touch numerous city facilities, including the city's server room.

Throughout the years since the city's incorporation in 1999, a conglomerate of different software systems were acquired to meet the various needs in the city, resulting in business processes that were built around the strengths and weaknesses of those systems. City Council has long expressed desire to have the current software platforms evaluated to ensure it's running as efficiently as possible, eliminating waste and modernizing platforms. The Government Finance Officers Association (GFOA) won the city's bid for this project and will begin by doing an analysis of many of the City's business processes. After identifying areas where the processes themselves could be improved, current software platforms can then be evaluated to see where efficiencies can be made.

It has been several years since the city's website received a major update. With advancements in technology and design, the IT Department is looking forward to creating a new design that is both more user friendly and visually appealing. A simplified login process as well as more, and easier to access, information for residents are just a few of the features in the works. All of this work is being performed by in-house talent. 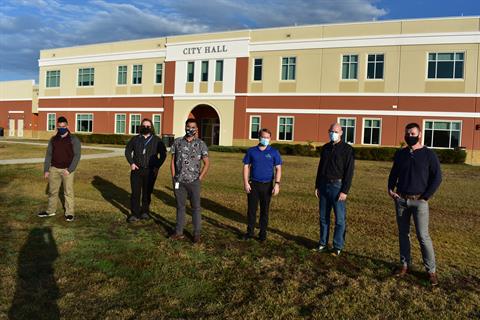