This page was printed from : https://www.palmcoastgov.com/newsroom/2020/9/1/4700/city-of-palm-coast-traffic-engineer-fcso-deputies-work-to-improve-intersection-flow
The Newsroom

Palm Coast - The City of Palm Coast is looking to improve traffic flow at intersections throughout the city by changing how the signals operate. City staff is working with the Flagler County Sheriff's Office (FCSO) Traffic Unit to make coordinated decisions that will make it easier for drivers and thus, improve safety.

After receiving a few work orders requesting staff find a better traffic flow, city traffic engineer Michael Grunewald, went to the area to check it out. This is familiar territory for Grunewald, who joined the city a year ago, and has more than 25 years of traffic engineering experience. His previous job was technical expert for a traffic signal controller distributor that covered 13 states and his role was solving traffic problems through solutions specifically with traffic signals.

"Since joining the City, I'm thrilled with the high quality of the traffic signal intersection design," said Grunewald. "We have all sorts of tools at our disposal to make slight changes to make the signals interact better with the driver."

Members of the FCSO - Commander Gerald Ditolla, Sergeant Adam Biss, Sergeant Scott Vedder, and Commander David Williams - provide the City with eyes and ears. They report what they see happening to the Traffic Division. Their evenhanded evaluation of the same problems that drivers report gives our traffic team a clearer picture of exactly what is happening that needs to happen better.

"We welcomed the opportunity to assist the City of Palm Coast in improving traffic flow through major intersections," Sheriff Rick Staly said. "Not only will this alleviate irritating traffic delays but it can help avoid collisions in these high crash intersections. We look forward to continuing to help the City in this joint endeavor."

Tyler Gibson is the second member of the City's Traffic Engineering section. Tyler has been a lead traffic signal maintainer for the City previously in Public Works. Gibson and Grunewald are scheduling Friday afternoons as a recurring schedule to visit traffic signals in the area to determine timing changes and whether the equipment is functioning correctly. So changes and improvements will be continuing.

Got a traffic concern? Send in your concern through Palm Coast Connect at palmcoastconnect.com. For traffic emergencies, contact the Flagler County Sheriff Office. 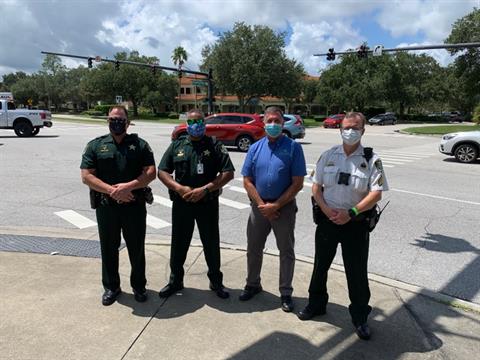