This page was printed from : https://www.palmcoastgov.com/newsroom/2020/10/26/4734/founders-day-2020-celebrating-and-learning-from-palm-coasts-first-pioneers
The Newsroom

Palm Coast - It's just days away from a major milestone in the city of Palm Coast - the 50th anniversary of Founders Day, celebrating the city's first pioneers.

With The Beatles song "Here Comes The Sun" playing in the background - reminiscent of the days when the song played at the ITT (International Telephone and Telegraph) welcome center decades ago - residents and former ITT employees gathered together in city council chambers to learn about others special connections to Palm Coast's history.

"Palm Coast developed because of the people who lived here," said Palm Coast Historical Society President and Co-Historian, Elaine Studnicki. "Yes, indeed, ITT was a big business, and they planned this community with great effort and detail. But Palm Coast is here because of the people, the volunteers, the civic organizations, the garden club, the art league - those groups have been here for 30 plus years. It's those people, and the people who are here today, that will take Palm Coast forward."

Oct. 29, 1970 was the date ITT Corporation held its grand opening for the Palm Coast development. So in 2010, at the request of the Palm Coast Historical Society, the Palm Coast City Council issued a proclamation citing that date as "Founders Day" for the community. Annual celebration of the special date is now held on the available date closest to its anniversary.

"Our celebration of Palm Coast's 50th anniversary honors and preserves each of our own special stories," said Mayor Milissa Holland during introductory remarks. "Wound together, they tell a tale of why we moved to Palm Coast and of how our first residents stood together to create a government they had faith in to make dreams come true for future generations."

Some of that past was shared from the people who lived it - such as ITT Advertising Manager Linda Kasper, who's role including taking care of 250 billboards; brochures for new developments like Pine Lakes, The Oaks, and Sea Colony; as well as printing for the company with a $3.5 million budget.

"We got 250 cars a day that came off the interstate to go to our welcome center and that was after the interchange was built," Kasper said. "Otherwise, they'd have to drive up from 100 up to Old Kings Road."

New residents were drawn to Palm Coast for several reasons such as sunshine and according to Kasper, good salesmanship. But it also came down to location, location, location, and Kasper added, "Prices. The idea of owning a home and a nice lot and being close to the beach."

Another former ITT employee, who's now retired, Senior Accountant David Hayes, recalls his unique tie to Palm Coast's earliest days. At 23, he was a recent graduate of Florida State University and was working for the company as a junior accountant. One day, he said Alan Smolen, President of ITT in Palm Coast, asked him to caddie for pro-golfer Arnold Palmer at an upcoming event and to know the Palm Harbor Golf Course like the back of his hand.

"Every day I'd get up at noon and all of my other fellow colleagues would look at me like, man this guy's got the luckiest job in the world," Hayes said. "So I played that course every day for about two weeks."

The year was 1980. Hayes said Palmer flew himself in on his private plane and played 18 holes of golf that day.

"The last thing I remember from Mr. Palmer is watching him taking off and giving me the famous thumbs up," Hayes said. "To this day I just get goosebumps every time I think about how I got to spend my day with Mr. Palmer - one of the greatest players ever."

Other memories shared were by that of local attorney, Michael Chiumento III, who moved here in the early 1970s and grew up in Palm Coast. He remembers his family buying the 60th house in the city in the C section.

"The only thing they had here was a jiffy store, which is now over by the community center," Chiumento said. "And they had the sales center with the big tower that we've all seen and I lived around the corner from that."

Chiumento showed photos of the area from years ago. He also described his childhood activities of playing with friends and fishing at the marina.

"The older I get, the farther away, the more I find it to be - sweet," Chiumento said. "It was a time kind of like Tom Sawyer. We meandered around town on our bicycles at the age of 8, 7. The only thing our parents worried about were rattlesnakes and maybe even getting lost in the woods sometimes. And that did happen."

With generations of families now living in Palm Coast, the history is being kept for the people's purpose and to pass on to children now growing up in the city - something the Palm Coast Historical Society is working hard to preserve.

'What I am most amazed at is the amount of history in 50 years, and even in 20 years of the city development," Studnicki said. "If you really take a look at the history, it is wide in scope and deep in content and it's going to take me years to learn about it, but I'm thrilled to be able to share it with everyone."

To find out more about the Palm Coast Historical Society & Museum visit www.PalmCoastHistory.org. 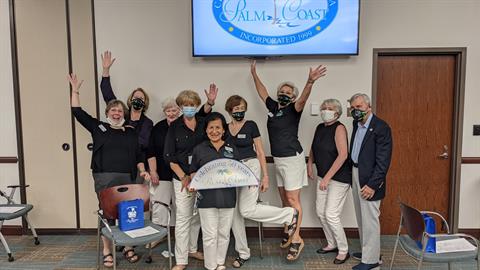