This page was printed from : https://www.palmcoastgov.com/newsroom/2020/10/23/4733/environmental-compliance-manager-brian-matthews-to-retire-after-more-than-40-years-of-service
The Newsroom

Environmental Compliance Manager, Brian Matthews, to Retire After More Than 40 Years of Service

Palm Coast - He is undoubtedly one the most knowledgeable and accomplished employees within the city of Palm Coast.

After more than four decades of service with the Palm Coast Utility Department, long-time Environmental Compliance Manager, Brian Matthews will retire, leaving a talented team of hard-working and skilled utility professionals to continue providing an essential service to residents.

Matthew's story in Palm Coast began April 25, 1979. He was employed by a construction firm that built Water Treatment Plant #1. ITT (International Telephone and Telegraph - Palm Coast's original developer) then hired him to be a treatment plant operator at that facility.

In 1990, he became a part of the team that designed and built Water Treatment Plant #2. This was a huge accomplishment because at the time the technology, membrane treatment, was at its early stages of development. The successful startup of this facility opened up another door for Matthews as he became involved with another new venture serving as a board member for the Southeast Desalting Association. His services in this capacity led to the development of the Membrane Operating School (MOC) which still is in existence today. The program, which he pioneered with a few other professionals, offers highly specialized technical training and career consulting for new and seasoned operators engaged in membrane treatment applications.

Matthews has been recognized for his outstanding ability to educate and convey complex real-world experiences for over a decade to benefit many professionals with different disciplines in the water and wastewater sector, and in turn, received many awards including the "Educator of the Decade Award" in 2016.

From the late 1990s to 2003, he worked for Florida Water Services Corporation, a multi-system private utility that bought Palm Coast's utility. His position involved problem solving and decision-making for all of their water and wastewater treatment facilities in Florida. He traveled from city-to-city, county-to-county examining problems, troubleshooting, developing compliance programs and providing specialized guidance as needed.

In November 2003, he became the Environmental Specialist receiving a promotion to his current position of Environmental Compliance Manager in 2017. Matthews contributed most of his time to supporting growth and development programs for the city, overseeing some capital improvement projects, and ensuring compliance with environmental regulations in areas such as water quality, water treatment, grant funding for clean water and pollution projects, wastewater treatment - to name a few.

Matthews truly passed on the knowledge and devotion to the rest of the team to keep everyone moving in the right direction. His groundbreaking work has had a huge effect on the success of the city and city work groups.

The City staff would like to congratulate Brian Matthews on his retirement from the city of Palm Coast after 41 years of service on Oct. 23, 2020. The team has enjoyed working with him during his time here and consider him a very valuable asset to the city and to our community.

Matthews will be missed by all at the city, and the employees here will strive to follow his stellar example. 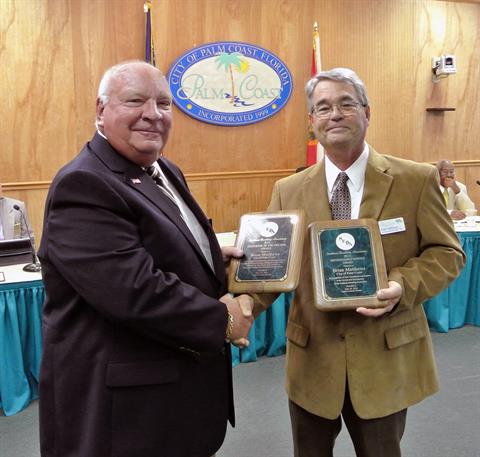