This page was printed from : https://www.palmcoastgov.com/newsroom/2020/10/13/4721/palm-coast-fire-police-captain-awarded-fire-safety-commendation-medal
The Newsroom

"The Fire Safety Commendation Medal is being presented to an individual for accomplishments and outstanding contributions on a volunteer basis in the area of fire safety and service," said David Kelsey, Awards Chairman of the Flagler Chapter, Sons of the American Revolution. "The award is being presented to recognize a dedicated citizen with a single goal - protect human life and property by preventing injuries or causalities due to fire or accident."

Capt. Garnes has responded to more than 10,000 emergency incidents in 14 years without missing a single incident requiring fire police presence. To put this into perspective, Capt. Garnes and the fire police program do not have set hours for coverage or response. Each day they are available to respond and assist, and in doing so provide one of the most valuable services in Palm Coast.

The Palm Coast Fire Police program includes a group of highly dedicated volunteer employees, whose mission is to provide safety for responders and victims at emergency scenes. Their primary role in the emergency response system is to establish a perimeter of safety around the emergency. Within this perimeter, occupants or victims of the emergency as well as emergency responders operate safely, without consequences from continued traffic flow.

Examples of fire police tactics include setting traffic cones to enable traffic flow past or around a scene; provide blocking to keep responders and victims from harm's way; maintaining a safe perimeter from fires, hazardous materials, or utility (electric and gas) issues; and securing a fire or accident scene to maintain a chain of custody for evidence.

"Palm Coast Fire Police exceed all measures in their ability to assemble and respond - not just to the majority of incidents, but every incident where their services are requested or part of the emergency response plan," said Deputy Fire Chief Bradd Clark. "The fire police members' ability to respond around the clock, literally every day of the year and often, to overlapping emergency incidents best exemplifies the volunteer spirit involved in this program."

There are opportunities for citizens who reside in Palm Coast to join the fire police program. For more information, contact fire administration at 386-986-2300 or visit www.palmcoastgov.com/government/fire. 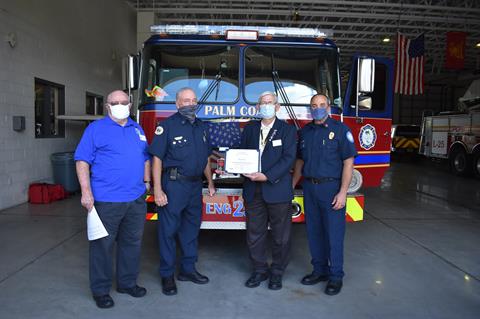