This page was printed from : https://www.palmcoastgov.com/newsroom/2020/1/14/4564/spotlight-palm-coast-council-business-meeting-jan-7-2020
The Newsroom

The results from the FPC Visual Project/i3 Academy Class were presented to Council and the public. The Coastal Innovation Center took 1st place, which included a $5,000 prize from the Flagler Education Foundation. Throughout the class, students worked with City Staff, developers and other subject matter experts to learn the inns and outs of creating an innovative design for Town Center.

As amendments to the DRI first established in 2004, the council heard the first read of a modified plan for Palm Coast Park (along US. 1 from Hargrove Grade and northward) as well as a resolution for a master site plan for a multi-family development at Matanzas West (between Belle Terre and US. 1 near Matanzas Woods Parkway. Both resolutions passed and the Palm Coast Park ordinance will have a second read at a future council meeting.

After the official 20th birthday of the City on December 31, 2019, the City proclaimed a celebration for the 20th anniversary of the founding to thunderous applause from the crowd and a cake & coffee social afterward.

Cynthia Schweers was announced as Director of Customer Engagement for the City of Palm Coast. This appointment serves as a promotion for Schweers, who currently serves as Customer Service Manager.

"We're moving forward with a people-first mindset here in Palm Coast," said City Manager Matthew Morton. "That means we're making our citizens the purpose of our work and not a distraction to it. Cynthia is going to help us take a look at everything we do and ensure we're doing it with our people first and foremost in our mind."

City Staff was directed to explore a potential discount store ordinance in response to citizen concerns about the proliferation of discount stores around the City.

"We're not looking to stand in the way of business or progress," said Mayor Milissa Holland, "but we need to ensure that everything built in Palm Coast is for the public good. There's compelling evidence from other communities around the country that dollar stores have various long-term effects, and we should be sure we're protecting our community.

The City will set aside $1.5 Million for University of Florida MedNex out of strategic reserves.

"This is one of the reasons cities need strategic reserves," said Mayor Milissa Holland. "UNF is going to be transformative for this City, county and entire region. Our ability to set aside this money speaks to how fiscally responsible this community has been over the years. We're proud to do our part as a City and stand next to commitments from many valued partners to shape the future of Palm Coast."

Flagler County Commissioner Donald O'Brien gave a presentation on Census 2020, thanking the City of Palm Coast for support in the effort so far and requesting ongoing support from the Council and Community.

"The Census is a fundamental process we get to contribute to as citizens," said Mayor Milissa Holland, "I was proud to chair this process 10 years ago for Flagler County and believe we're in great hands with Commissioner O'Brien this time around. I encourage all citizens to stay up to date with our social media about the census and fill out their form online as soon as it's available."

City Staff was directed to take a look at procurement procedures as it relates to "Piggybacking," the practice of joining in on contracts from other communities for goods and services.

City Staff, along with Diamond Communications, presented an update on Cell Tower upgrades currently underway in the City.

AdventHealth's "Pink Army" received over $20,000 from the Pink Army 5K, Round Robin for the Cure and Food Truck Tuesday Proceeds and donated that amount to the Florida Hospital Breast Cancer Care Fund.

Mayor Milissa Holland is renewing the "Mayor's 90/90 Challenge," encouraging everyone who works, plays or exercises in Palm Coast to exercise their way and move at least one mile per day for 90 days. More information can be found on PalmCoastConnect.com where participants can sign up and log their miles. 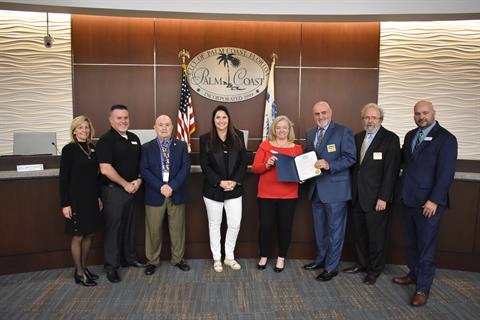 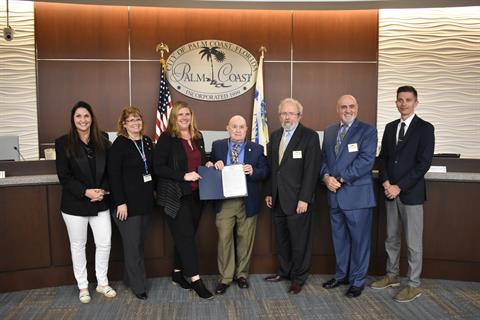 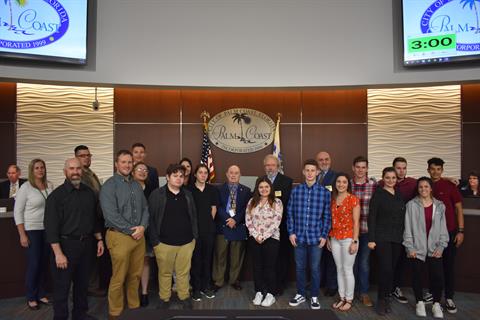 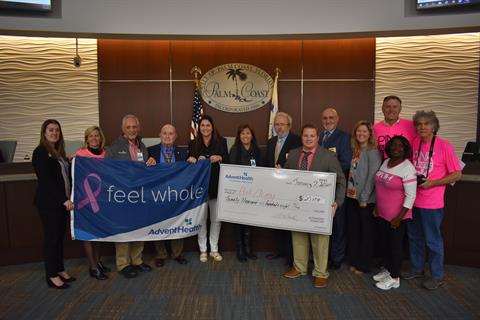